I joined the Rotary Club of MASH in 2006, my husband Rob is also a member. I get satisfaction from being involved in a hands-on club that benefits both the local community and further afield. I have been lucky to experience many things and a highlight was a trip to a small village in Fiji where members lived with the locals and assisted with repairs to various buildings in the village. I look forward to serving the club again as President.

David is a proud Rotarian and charter member of MASH.    He has enjoyed a long career in the food and hospitality industry and is the owner and founder of Bread Street bakery in Hamilton Street, Mont Albert.   This business enjoys an extremely close rapport with the local community.    The relationship between Bread Street and MASH is both enduring and endearing, and closely reflects David’s philosophy of sharing and giving ‘Service above Self’.

Nigel joined the Rotary Club of Mont Albert & Surrey Hills in August 2007. He was treasurer for four years prior to being elected president for the 2014-15 year.   Nigel has led the International Committee over the last three years and has a background in banking, finance and insurance.

Richard joined Rotary in May 1990.  He is a Paul Harris Fellow with 4 sapphires.  During his career he has organised and administered 6 Matching Grants and one Global Grant and many District Grants.   He has held many different offices over his 32 year membership.

Patt is a Paul Harris Fellow.  She enjoys organising activities including some excellent Trivia Nights.  Patt has been a mentor for Victoria Police/Rotary and is also on the committee of the Whitehorse Farmer’s Market.   Patt lives locally in Mont Albert North, is widowed with 3 children and is the nanna of 15 grandchildren.

Kai-Xing joined MASH in 2019. She has been a member of the Rotaract Club of Whitehorse since 2014 including co-president in 2017-18. Kai-Xing was District Rotaract Representative (DRR) of District 9810 in 2018-19.  She attended the 2019 RI Convention in Hamburg, where she was inspired to make the transition from Rotaract to Rotary.   Outside of Rotary Kai-Xing works full-time as a junior doctor in various hospitals around Victoria.

NB    Due to Coronavirus implications we are now conducting a mixture of "in person" meetings at Box Hill Institute as below and Zoom meetings. The format will depend on the speaker. Attendees at "in person" meetings must meet strict Covid protocols including social distancing, QR registration and sanitising. Zoom access to our "in person" meetings will also be offered through the Hybrid Meeting technology. Email info@rotarymash.org.au for details if you wish to attend a meeting.

There is no charge to visitors for the first three meetings and then a gold coin donation which will cover tea and coffee costs.

The Rotary club of Mont Albert and Surrey Hills is a friendly club in the Eastern Suburbs of Melbourne. It is a very active club providing service opportunities for its members both locally and internationally. 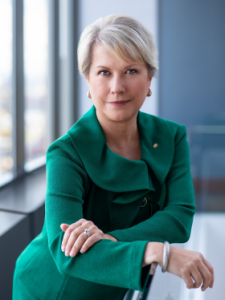 Jennifer Jones is founder and president of Media Street Productions Inc., an award-winning media company in Windsor, Canada.   She was chair of the board of governors of the University of Windsor and chair of the Windsor-Essex Regional Chamber of Commerce.